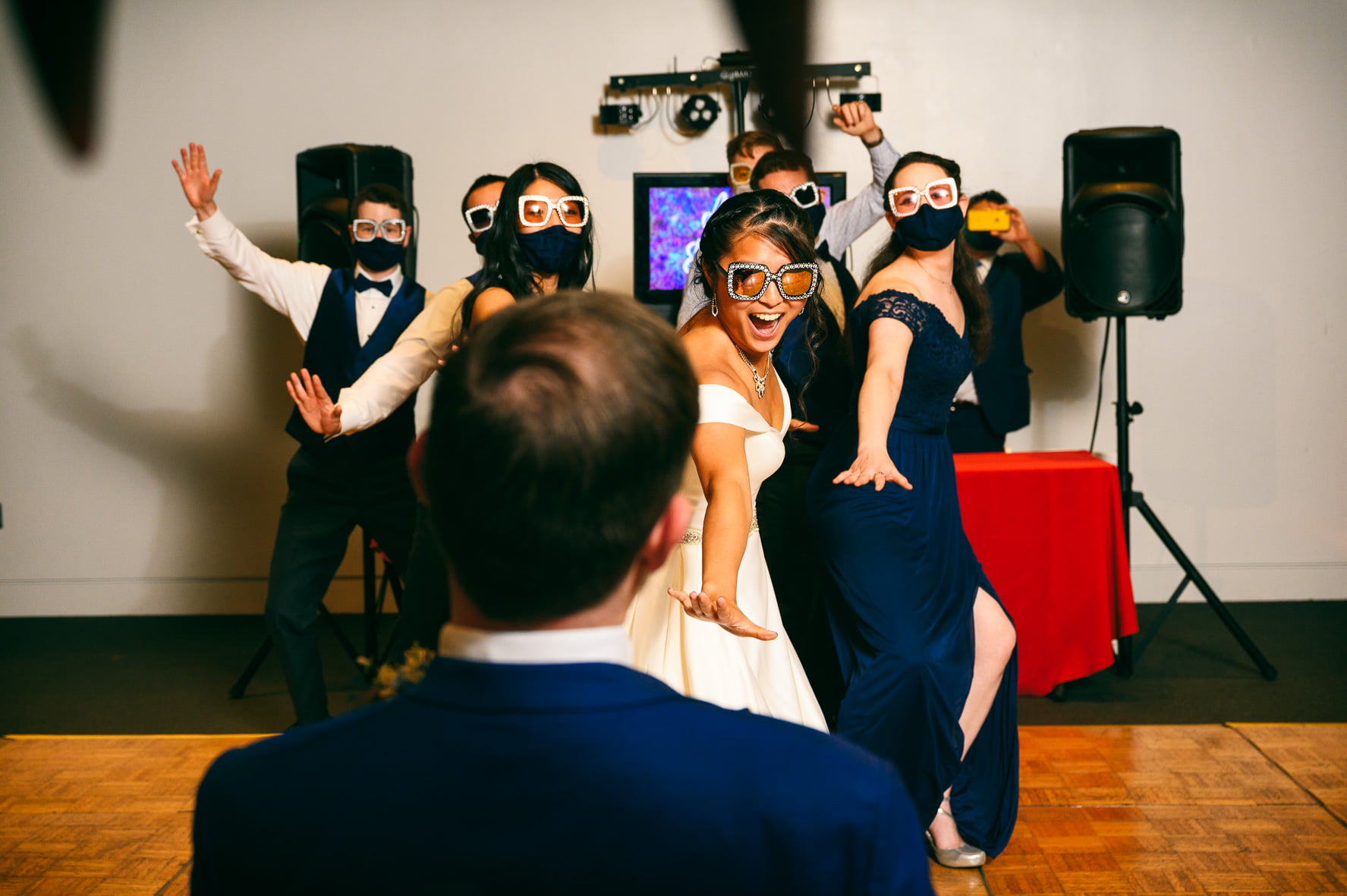 Saturday, October 24, 2020 at the Delaware Museum of Natural History

Here’s what the bride had to say:

The best DJ to work with. We’re both engineers by trade so the use of a shared spreadsheet that included questions to think about, potential music choices for various occasions during the wedding, and ceremony examples helped us tremendously! Adam was wonderful to work with, always got back to us quickly and even made a three song epic mix for our first dance!!! He also made it easy to surprise my groom on wedding day with a wedding party dance! Honestly, for any other party, we would definitely go with him again!!! The amount of quirky professionalism was perfect! Thank you for making our wedding incredible! 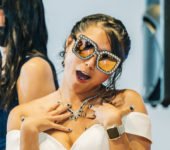 The bride and groom prepared a special three part first dance. It was mix of Buddy Guy – What Kind of Woman is This, Caravan Palace – Lone Digger and Ludacris – My Chick Bad.

Note: All the super-fine pictures in this post were graciously provided by Joe del Tufo of Moonloop Photography. He really captured the magic!

Surprise Dance for the Groom

This was a secret. The bride planned the whole thing without the groom ever catching on. It was a huge surprise and totally dazzling!

Microphone Safety During The Pandemic

Sharing microphones spreads germs. So, we started using two layers of microphone covers, with the top layer being color-coded foam. Each person was assigned their own color so there would be no sharing. The covers are only used once and then tossed. Notice the rainbow of colored mics below:

The cake was cut using samurai swords with the opening to Samurai Jack as the soundtrack. They even prepared a cutout of Aku the evil demon from the show.

The dancing was so ecstatic, that people either stayed low to the ground or were floating on air. 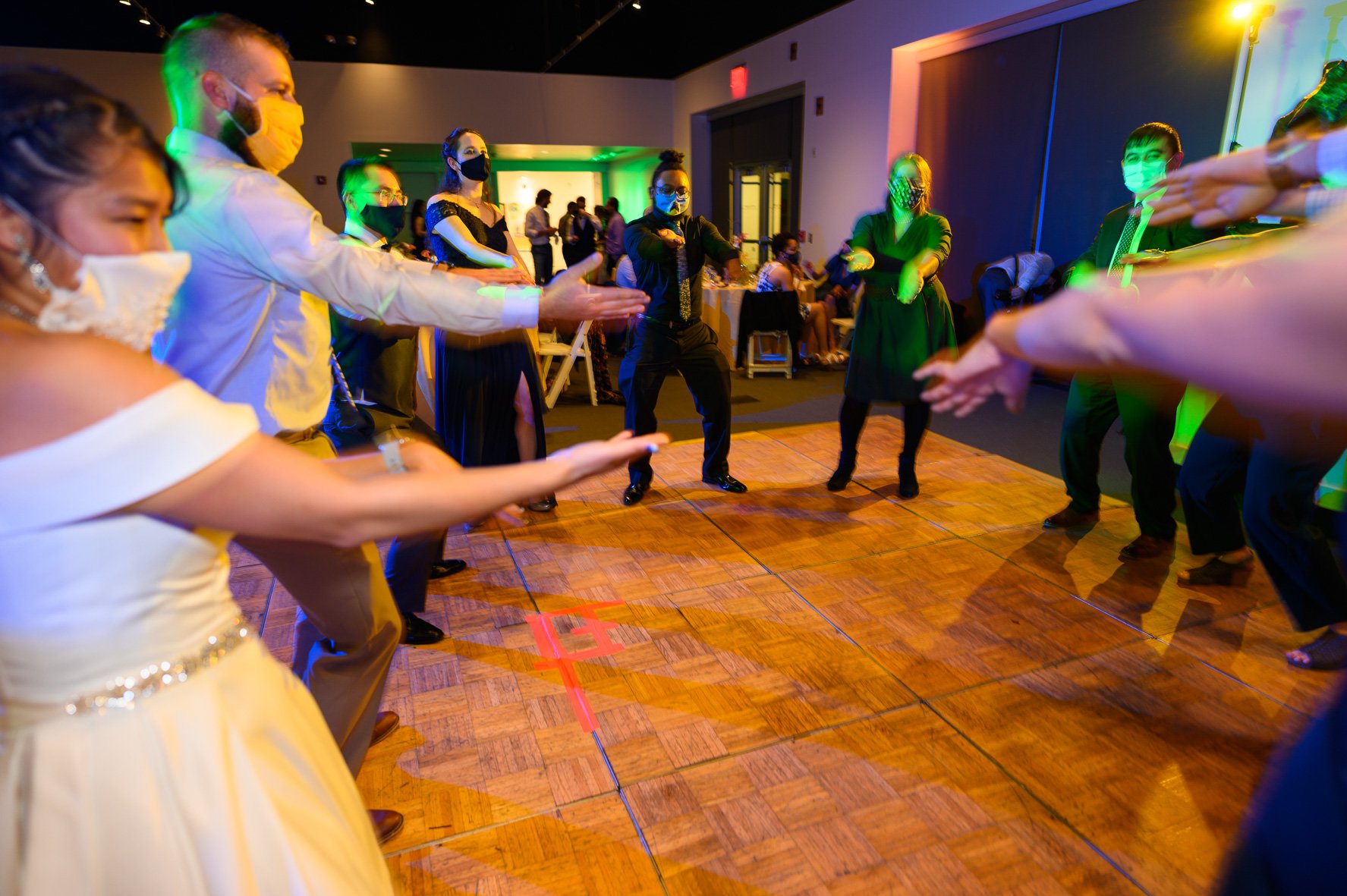 What kind of wild plans do you have for your wedding?

We can make them happen!

The shoe game is where the bride and groom give eachother a shoe and sit back to back on the center of the dance floor. Then the MC asks questions, like, “Who made the first move?” The bride and groom raise the shoe to show which person it is. Most of the time they agreed. Sometimes they didn’t. The guests had a copies of the questions at their tables. The grand prize winner was the one who answered the most correctly. You can check out their questions below.

There was a totally terrifying T-Rex skull in the main reception room. After talking it over with the photographer, Joe del Tufo of Moonloop Photography, we decided to uplight the skull. Joe made the most of it. I mean, look at them choppers!

Adam Oded
Adam Oded · Award Winning DJ · The Knot Best of Weddings Hall of Fame · I'll listen to you and play the music you love · adam@phillycustomdj.com · 917-951-2400
Scroll to top